When you think of kitchens, what comes into your mind? Most likely the following facts. It’s a place where food is prepared and cooked. It’s a place where you sometimes eat. It’s a place where people gather around and bond over cooking and the love of food. And you are quite right in those aspects. The kitchen has always been called the ‘heart of the home’, in a way that it nourishes and provides for the home. As time passes, the kitchen has since evolved from being a simple stone oven with a pot and firewood to a more elaborate and stylish series of cabinets and appliances, designed to make meal prep and cooking as efficient and delicious as ever,.

More often than not, kitchens have also developed into various arrays and configurations, each of which designed to fit to a specific room size as well as theme and style and one of these popular kitchen configurations is the island kitchen. Now, you might be thinking, what is an island kitchen? 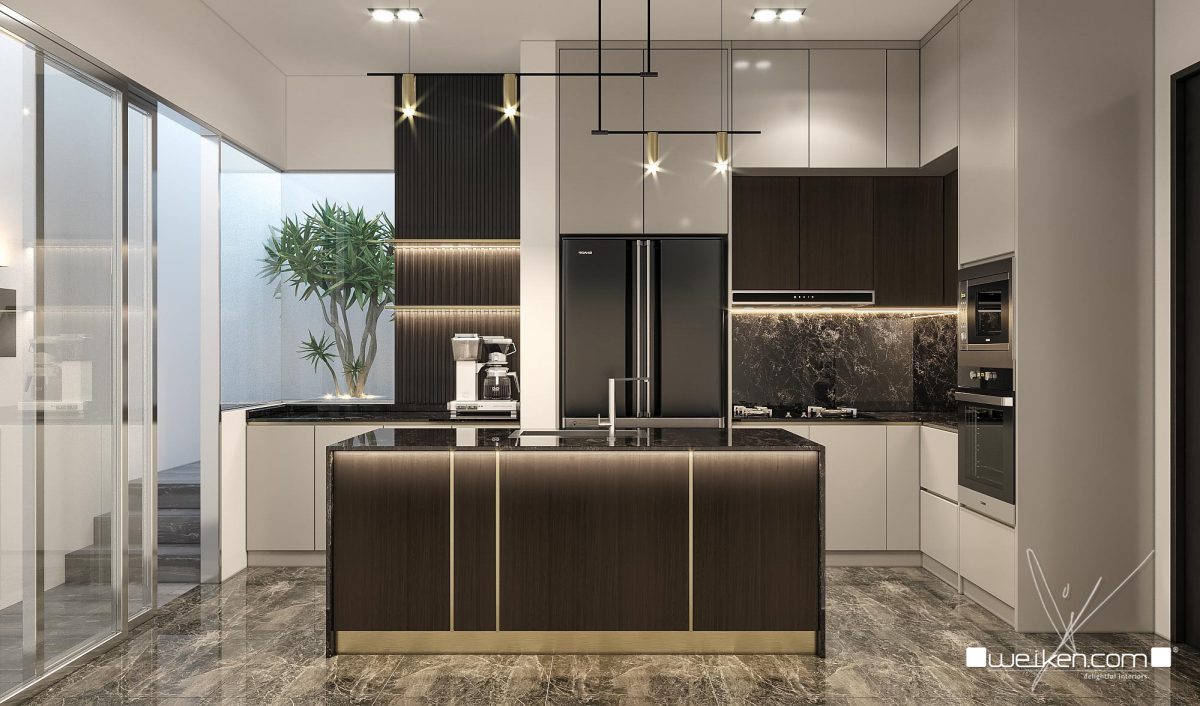 As the name implies, it is a kitchen or rather a component of the kitchen that is separate from the rest where most of the cooking and prepping is done. The island kitchen is often located in the middle of the kitchen cabinets or in the open kitchen area, hence the name.

Island kitchens are often seen in contemporary and modern interiors, particularly in large spaces. But, believe it or not, island kitchens have also been employed in smaller areas, making it one of the most versatile and efficient kitchen configurations ever. And in recent years, innovative and ingenious designs have transformed the modern island kitchen into unique kitchens that have more than one function, if not more.

Now, here is a question that many hdb homeowners ask designers. Can an island kitchen look good in an hdb home? Can it increase the value and aesthetics? And more importantly, will it take up too much space? Many designers will say that anything is possible if one were to think outside the box and look at the pictures. So, if you are thinking of having one, here are a few tips to consider as well as ideas for you to try when it comes to having your own hdb island kitchen.

Let’s start with the very first step. You want to have an island kitchen, but does your space allow it? Where do you plan to put it? This is where you need to familiarize yourself with the intended area and take note. See if there are provisions for electricity and water. Does your intended kitchen area have big enough space? Does it have a window or at least provisions for ventilation? It helps if you write down the measurements on a piece of paper so that you can plot out certain locations. Then, assuming you are going for integrated appliances in your hdb island kitchen, take note of the size and type of appliances you will be using.

Some hdb properties have certain rules on what kind of appliance is permitted. Some of the rules could include inductions cookers being permitted or inverter refrigerators only and some others. The reason that this tip must be considered is because as much as you want to have that picture perfect and complete island kitchen, not all island kitchens will have the exact same look because of these considerations. As such, there will be certain things that will be adjusted such as the size, the materials and hardware that will be used and perhaps overall location. But this doesn’t mean you won’t have that kitchen. In fact, it gives you so many opportunities to have a unique island kitchen that will stand out from the rest. 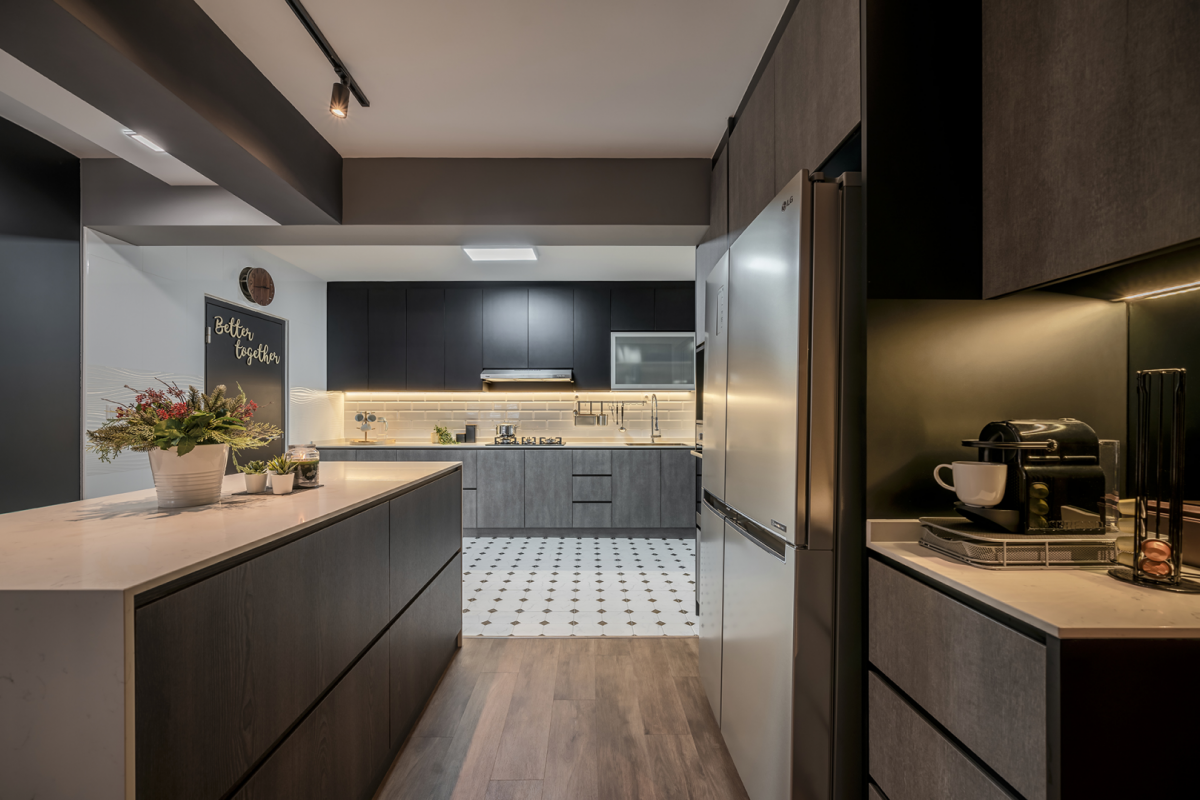 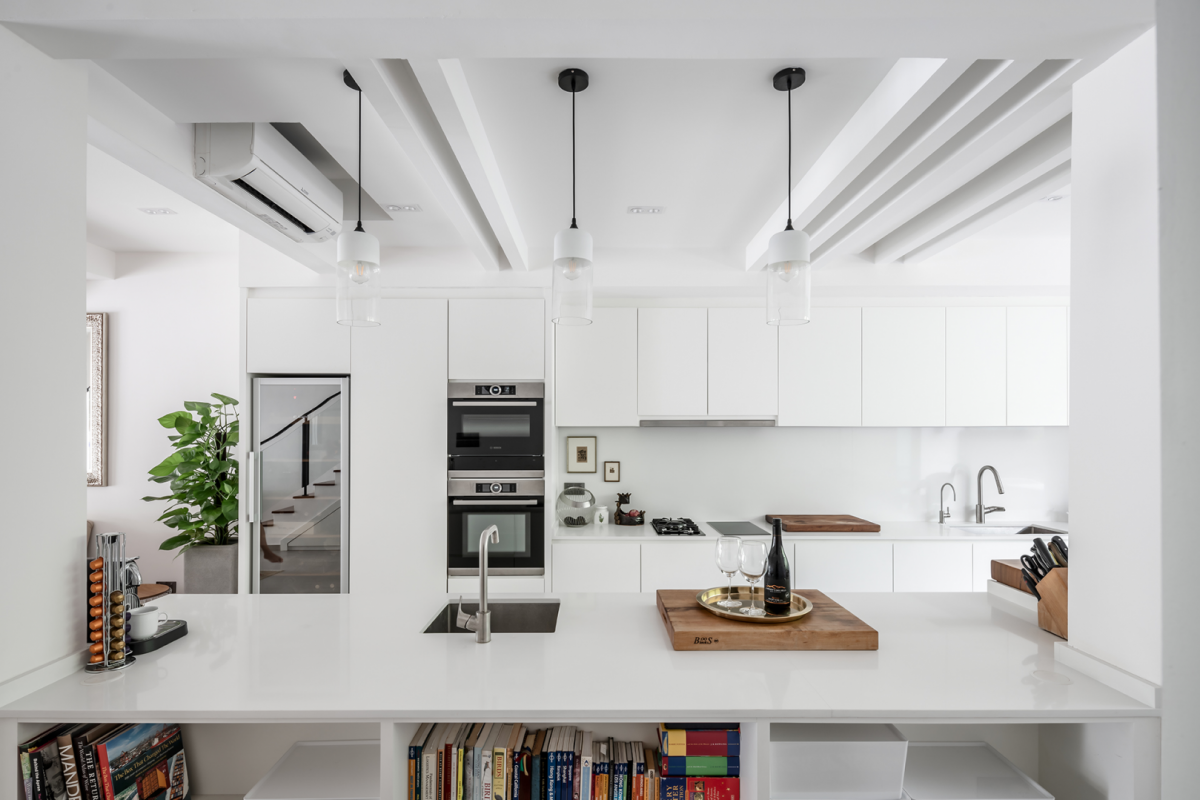 Now that you have an idea on what to do with your intended space and the materials you will be using, it’s time to create your perfect kitchen. Have you ever watched those cooking shows like Rachel Ray or Emeril Lagasse? If you have, you’ll notice that the kind of kitchen they use is an island kitchen complete with sink and cooktop.

So why do they use that?

Simple, they do what is called live cooking wherein the chef prepares and cooks the food in front of the diners and serves it straight away. Take a cue from this interesting conversation starter and apply to your island kitchen. A really cool and useful feature to add to your hdb island kitchen is a breakfast nook. This can be in the form of a cantilever shelf placed either lower than the island kitchen counter or a few centimeters higher; a narrow table top supported by thin legs or even a small extension of the counter itself. Pair it with some stylish and sturdy bar chairs so that your guests can sit comfortable while enjoying a live cooking in your home.

We have talked about space efficiency and making the most of your area. The same can be said when it comes to your island kitchen. While the rest of the kitchen cabinets have storage space, why not apply that same principle to your island. 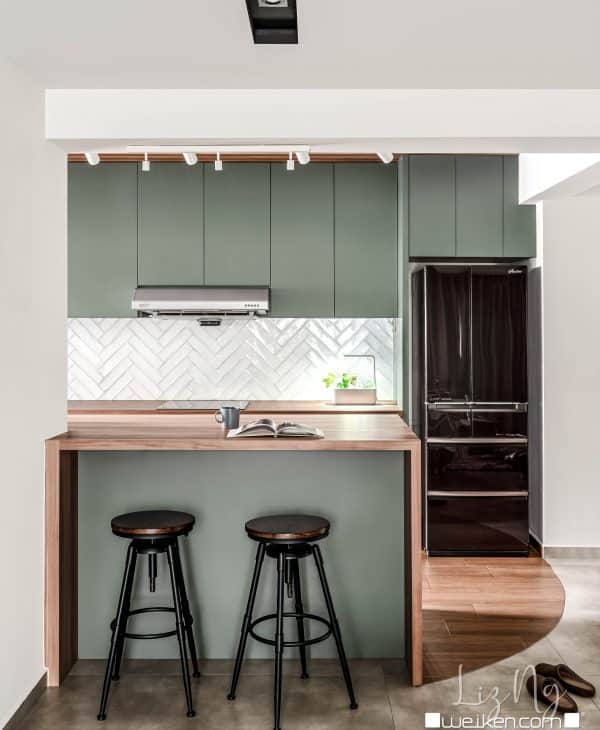 Traditionally, island kitchens tend to be quite big and rectangular in shape. In terms of balance, they tend to be equally wide as the rest of the kitchen cabinets. However, not all hdb homes have big spaces for the kitchen. Sometimes, they have smaller spaces. Again, that should never hinder you when you’re creating your kitchen. The island, believe it or not, can actually be adjusted to sit your area. Depending on how you work in the kitchen, you can designate the island as the prep area or the dining area. You can have your island kitchen in a smaller size such as it being 1500mm long or even 1200mm.

A good way to make it seem smaller and lighter is by having one side of the island kitchen be supported by a singular post. This will actually make your overall kitchen look a lot more open and minimalist. You can even make a perfect square island measuring at 1000mm with a foldable countertop that can open out to a wider safe. 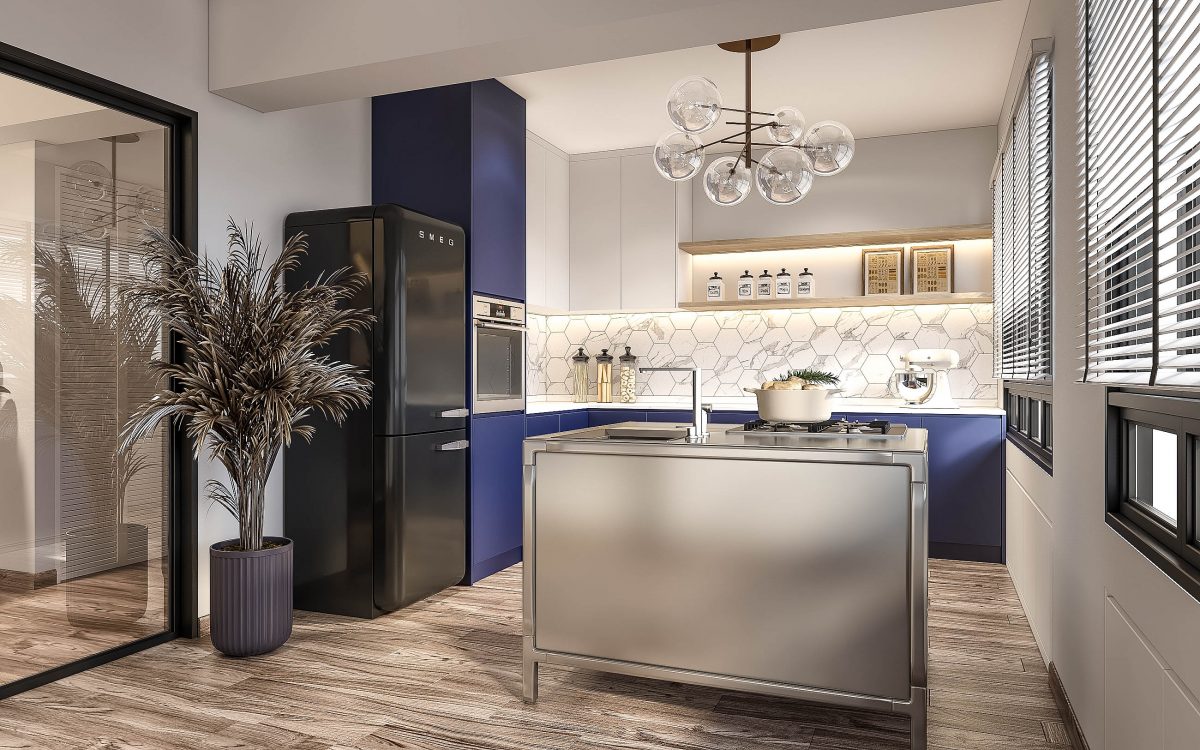 This idea makes the hdb island kitchen something of a convertible and versatile piece of furniture. Especially if your hdb home is quite small and the idea of having limited floor space is out of the question. You can even add an extendable or foldable countertop. 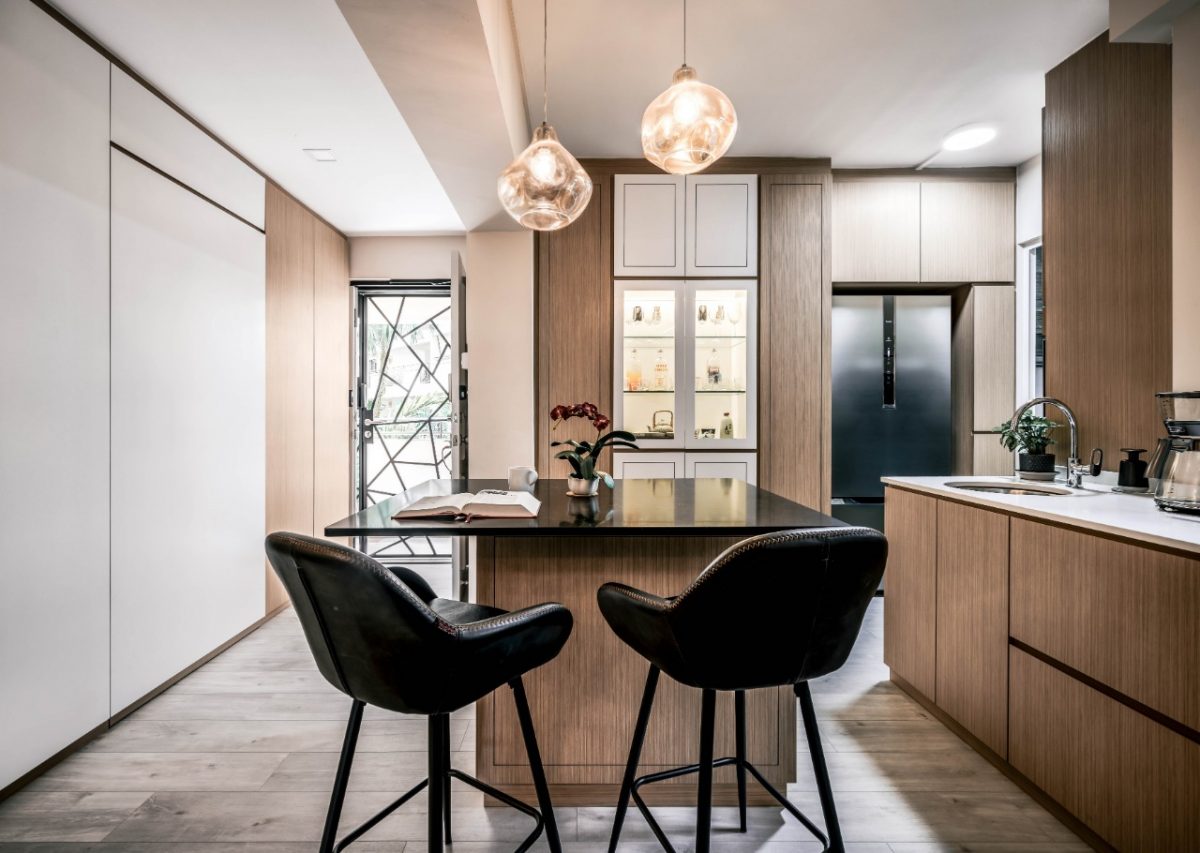 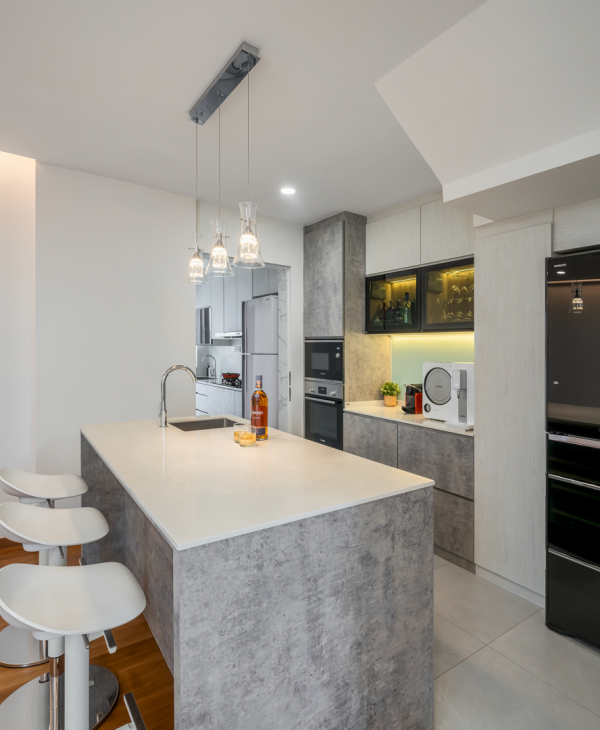 While we are on the subject of maximizing space, most hdb homes have little space for a full dining set and more often than not, some opt to do away with having a full dining set. But what if you could incorporate the dining set to your kitchen island? As of late, that is what most designers and homeowners are doing. One side of the kitchen island jots out into a dining table. You can either make your dining area as low as 750mm or as high as 1000mm.

You can use either regular dining chairs or even bar chairs depending on the height of your dining area. Your dining can also become your working area. This is quite popular with households that have children who often study together and often invite their friends over for either studying or having afternoon snacks; with the kitchen being conveniently close. 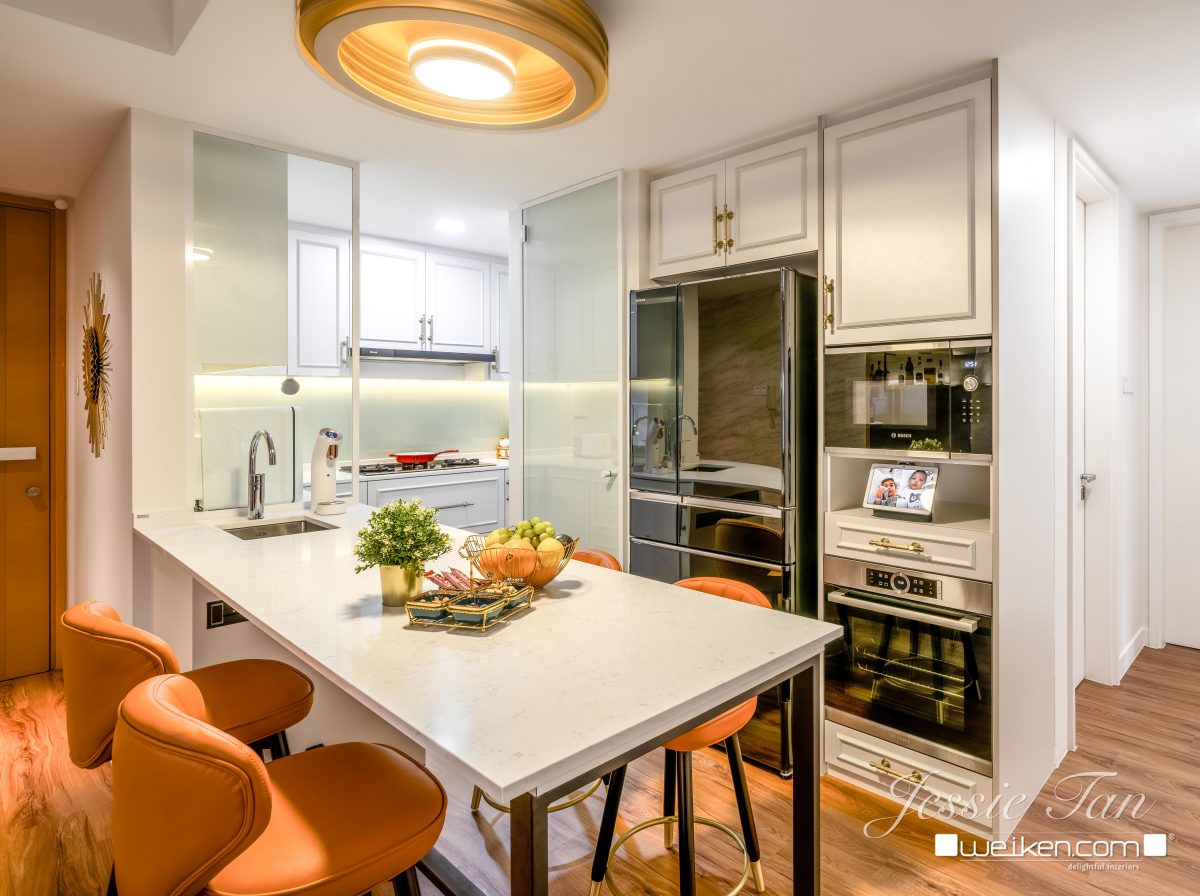 You may have the idea in your head, but when it comes to executing the final look, you might hit a hard wall. Literally and figuratively. When in doubt, it is perfectly alright to seek professional services. There are many designers in Singapore who specialize in creating space efficient and spectacular looking island kitchens.

For hdb island kitchen projects, it is advisable to consult with property recommended designers as they are familiar with the property rules and regulations when it comes to renovation and construction. Apart from that, they have years of experience with other hdb properties and can apply those experiences when executing and creating your one of a kind island kitchen.

Click on our profile to see the full view of this